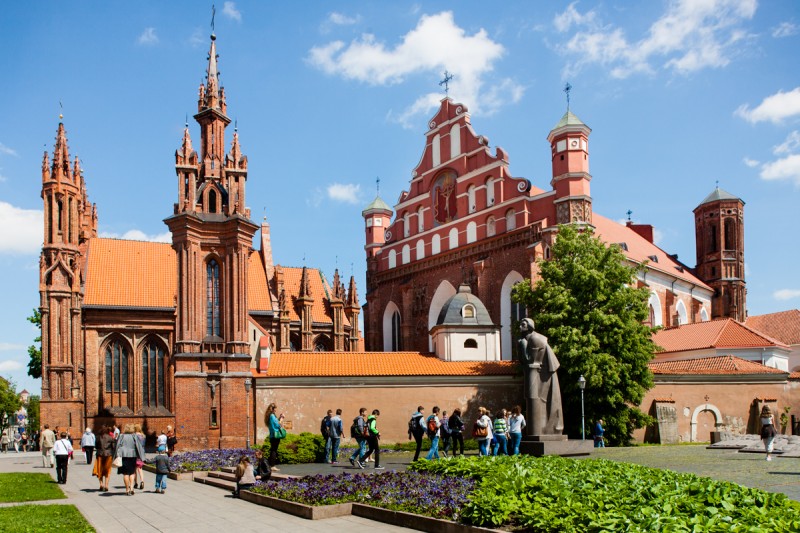 St. Anne's Church in Vilnius is an exceptional building. It stands out among the other examples of sacral architecture in the city not only because of its medieval origin, but also because of its unique style - in the lands of the former Polish-Lithuanian Commonwealth it is the most splendid example of late Gothic architectural style called the Flamboyant Gothic. In the case of the Vilnius church the characteristic fluent, flame-like forms were creatively adapted in brickwork.

KSt. Anne's Church stylistically matches the neighboring Bernardine Church and monastery;  however, it attracts the greatest attention. Its most striking feature is the multi-faceted façade crowned with two openwork towers. Above the simple porch, opened only by three arcades, rises a complicated architectural composition. The main role in it is played by the motif of a sharp ogee arch, interspersed with rectangular windows. There are also slender, polygonal pillars and pinnacles. All these elements are made of hand-formed brick of as many as 33 different shapes. The light and harmonious decorative forms of St. Anne's Church bring to mind not a work of architecture, but rather architectural craftsmanship. The writer Józef Ignacy Kraszewski was fascinated with the church and compared it to an ornate Gothic monstrance. 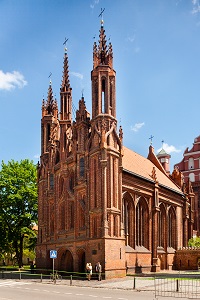 Attempts to determine the founder and designer

The identities of the founder of St. Anne's Church and the author of its architectural design are still to be established. According to 19th century historians, it was the Grand Duke of Lithuania Vytautas and his wife Anna who brought about the construction of the church. This opinion was also repeated in publications from the beginning of the 20th century. The new theory which emerged at that time held that the church had been created for King Sigismundus Augustus to be used as a mausoleum for his wives, Elizabeth of Austria and Barbara Radziwiłł. However, the most widely accepted view is that the church was founded by Alexander Jagiellon at the end of the 15th century or the beginning of the 16th. The difference of opinion concerning recreating the history of the church may have resulted from the fact that in the sixteenth century there were two or even three St. Anne's churches in Vilnius - one within the castle walls and two in the city.

Similar uncertainty surrounds the identity of the builder. The majority of researchers consider Michael Enkinger from Gdańsk to be the author of the design; he built St. Francis' and St. Bernard's Church, which is adjacent to St. Anne's Church, and the  House of Perkunas in Kaunas, among others. Although this attribution seems to be the most likely, there are researchers rejecting it and indicating other candidates, such as the court architect of King Vladislaus Jagiellon, Benedikt Rejt from Prague, author of the Vladislav Hall in the Prague Castle. So far, none of the above attributions has been finally proved and identifying the author of the architectural design of the church requires further in-depth research.

History of the church

For some time in the 16th century St. Anne's Church was in the hands of Protestants. In the 1560s it was damaged in several fires; in 1581, when the restoration was completed, it was handed over to the monks from the nearby Bernardine monastery. At the beginning of the 17th century a new sacristy was added next to the northern wall of the chancel and a gallery connecting the two buildings.

St. Anne's Church was again damaged by a fire in 1794. As a result, cracks and crevices appeared on the vault, the southern wall and the façade. The temporarily repairs, designed by architect Michał Szulc, involved replacing iron reinforcements. Besides, two side entrances to the church were bricked up at that time, and the cracks inside and outside were plastered over (the external plasterwork was removed during renovation works in 1855-1858). In 1872 a neo-Gothic bell tower designed by the Russian architect Nikolai Chagin was built in front of the church. Between it and the church there is a wall with a gate leading to the courtyard of the neighboring Bernardine Church.

While the external appearance of St. Anne's Church has not undergone significant transformation over the centuries and gives a good idea of the original shape of the church, most of the interior design comes from the early 20th century. It was executed in the years 1902-1909 during the comprehensive restoration of the church carried out in cooperation with specialists from Vilnius, Cracow and Warsaw.

Due to the fact that the church was in a very bad state of repair, a committee was set up in 1902 to raise the funds and determine the course of the restoration. The first chairman of the committee was the Marshal of the Vilnius Province, Count Adam Broel-Plater. The architect Józef Piotr Dziekoński from Warsaw was appointed the leader of the restoration project. He was assisted by Sławomir Odrzywolski, who had restored Gothic monuments of Cracow. A number of local engineers and architects were engaged in engineering works aimed at strengthening the structure of the church: A. Antonowicz, M. Hattowski, K. Falewicz, K. Girdwainis. 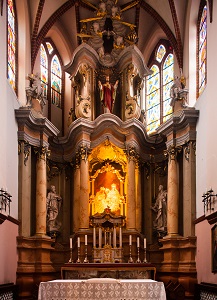 Although the works were carried out in accordance with the contemporaneous scientific principles of restoration and in such a way that "the original shape of the building should not be changed in any way, and the restoration that is clumsy and incompatible with the Gothic style can be removed", in many respects they provoke criticism. Among others, there have been doubts about the construction of a new vault over the nave (originally St. Anne's Church was built without one, and the existing ones were said to have a negative impact on the strength of the building's structure). The vault over the choir and the chancel was dismantled and carefully recreated, while the one over the nave was replaced with a new one designed by Dziekoński. The works also comprised: underpinning the foundation, thickening the walls and strengthening the whole structure with a system of iron pulls. The bricked-up side portals in the façade were reconstructed and new doors, forged in Warsaw in 1908, were installed. On the outside the church was painted with bright red paint, which fortunately has faded by now, revealing the natural color of the bricks. Most of the church's furnishings were also created at that time: the organ casing, the pulpit and confessionals. Among the earlier furnishings particularly valuable are three Baroque altars (the main altar with the painting Madonna and Child with St. Anne and two side altars) designed in 1747 by the architect Johann Christoph Glaubitz. 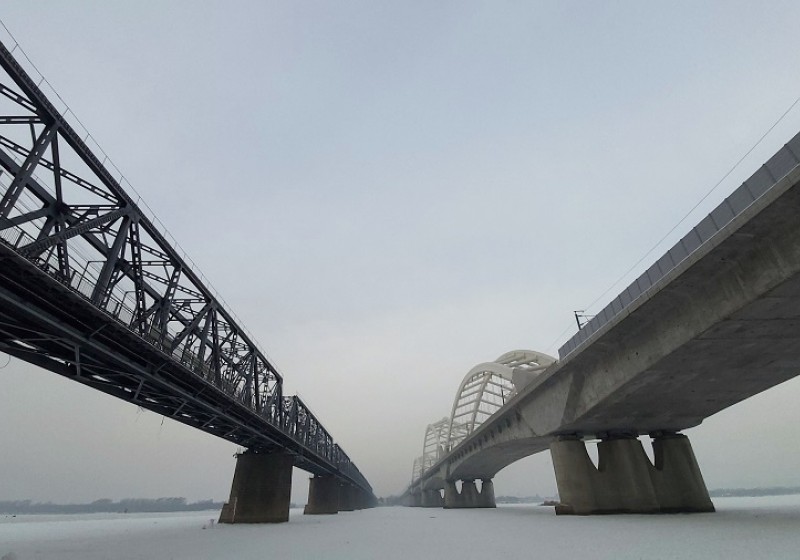 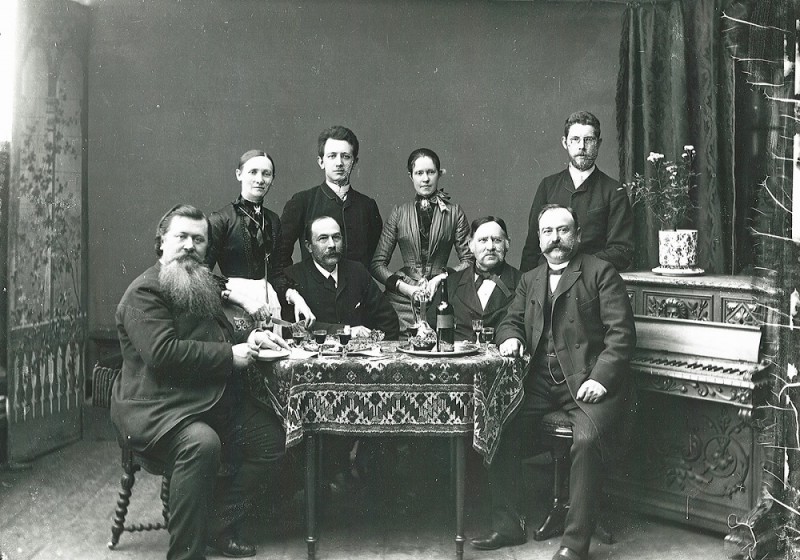 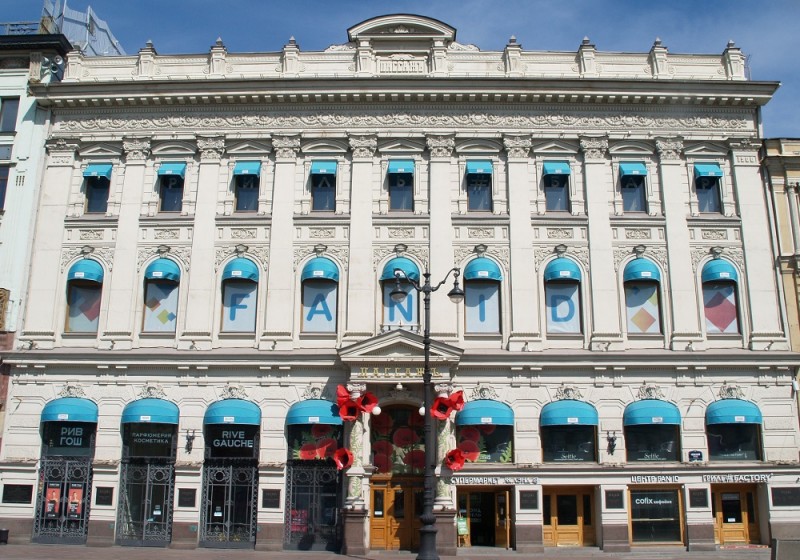 Russia
“The Passage” shopping arcade in Nevsky Prospekt
We use cookies. If you continue without changing your settings, we'll assume that you accept all cookies on the website. Learn more OK